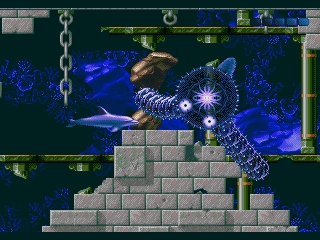 The initial stage of a Vortex lifeform (it is assumed). These are strange creatures only appearing in Ecco: The Tides of Time and near the end of the game, prominently in City of Forever. The defeat of the Vortex Queen is the first appearance of this creature, as the Queen reverts to this stage in order to survive and escape the new Vortex hive after the onlsaught of Ecco and the cetacean army. These creatures are large and very dangerous to Ecco as they will attack him aggressively and unless forced away by Ecco's sonar, will proceed to bear-hug him to death.

Appearing as large bugs, they are transparent blue and have a glowing sun-shaped membraneous center, most likely a major organ or power source vital to existence. Great, long arms that are formed of spined segments, which is also reminiscent of water bug physiology, serve as the larvae's main means of locomotion. While swimming a protective film encases the outermost extremities of their eyes, only opening them in instances of attack or perturbation followed by a shrill alarming buzz. While the Vortex Queen herself has the ability to revert to this form, it is unknown whether the other Vortex-kind also share this process. Numerous larvae are seen within the depths of City of Forever, but it is unclear if these are all suppose to be different encounters with the Queen (as dictated by technical limitations of the game) or encounters with unique and different larvae. The reproduction process is also in question as to whether this form specifically relates to how a Vortex lifeform is formulated, as in Ecco the Dolphin Vortex drones are birthed fully-formed from the Queen. However, differences in atmosphere and circumstance from Planet Vortex to Earth (warmer waters, Queens weakened state) may have influenced the Queen's change in reproduction methods and processes.

Retrieved from "https://eccothedolphin.fandom.com/wiki/Vortex_Larvae?oldid=6429"
Community content is available under CC-BY-SA unless otherwise noted.