The Asterite (called "Asty" by a few fans) is the guardian of the ocean, and by extension, the planet. It lives in a cave deep underwater referred to as the Asterite's Cave. The Asterite is shaped like a DNA strand made up of globes which add to its power. Its ability to communicate is reduced with every absent globe, to the point where it is no longer able to produce whole sentences.

The Asterite has existed in the ocean for millions of years and knows of many events from the planet's past. It can sense the presence of foreign, unnatural beings in the ocean. It has the power to communicate with all of the ocean's inhabitants simultaneously.

It is replaced in Ecco: Defender of the Future by the Guardian.

Ecco first met the Asterite during the first game when he ventured to its cave in search of information about his lost pod. The Asterite told Ecco that there was little it would do for his pod unless Ecco travelled fifty five million years into the past to recover its lost globe. It opened the path to Atlantis for Ecco and told him to use the Time Machine there to travel back in time. When Ecco returned with the globe, the Asterite regained its full power. It then granted Ecco the powers of infinite oxygen, a self restoring health bar and the death sonar. These powers were vital to facing the Vortex race head on and allowed Ecco to defeat them and their queen.

In Ecco: The Tides of Time, the earth was invaded by the Vortex Queen and her drones. Her first act was to destroy the Asterite to take away Ecco's powers. This scattered the Asterite's globes to the far ends of the ocean. When it was fully restored it returned Ecco's powers to him and summoned a massive army of singers to help combat the Vortex while Ecco sets off to defeat the queen. After Ecco defeated the Vortex Queen and destroyed their base, the Asterite ordered Ecco to travel to Atlantis and destroy the Time Machine. However Ecco instead used the Time Machine once again and departed to an unknown destination and era. 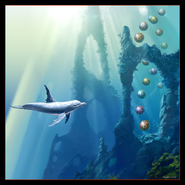 Concept art from 2014.
Add a photo to this gallery
Retrieved from "https://eccothedolphin.fandom.com/wiki/The_Asterite?oldid=9406"
Community content is available under CC-BY-SA unless otherwise noted.