This page lists the video games of the Ecco the Dolphin franchise, as well as attempts by series creator Ed Annunziata to continue it in the form of spiritual successors.

The original Ecco games were created by Ed Annunziata for the Sega Genesis console. With no new releases since Ecco Junior in 1995, the series sadly has yet to be continued or concluded. This is a result of Sega owning the intellectual property rights to the franchise, and refusing to license the rights back to Annunziata to make another game. There have been plans since the 1990s for a new entry to continue the story from where Tides of Time's cliffhanger left off. At the time, Annunziata attempted to convince Sega to greenlight a new Ecco game for either the 32X or Saturn, but these proposals were rejected. As recently as 2013, Annunziata has attempted to revive the series with pitches for new Ecco games to Sega, however these efforts have also been rejected.

The original games were later ported to the Genesis' add-on console, the Sega CD. These versions included enhancements such as extra levels, new soundtracks, changed sound effects, FMVs and other bonus material.

A Microsoft Windows version of Ecco the Dolphin was released in 1995, featuring improved graphics and other new features. 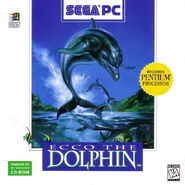 Ecco the Dolphin (Windows - 1995)
Add a photo to this gallery

Similar to the Sonic the Hedgehog series, Sega released 8-bit conversions of the Ecco games for their Sega Master System console. Rather than being watered down ports, these games feature new level designs, enemies, background music, and other features not seen in the 16-bit versions. These versions are largely identical to the Game Gear ports, but feature a fullscreen aspect ratio and a higher screen resolution. The second game was released exclusively in Brazil.

Ecco: The Tides of Time (Master System - 1995)
Add a photo to this gallery

Defender of the Future

This was an attempt to reboot the Ecco franchise in 3D on the Sega Dreamcast console. The team behind the original series had no involvement with this game. The game's story also has no connection to the original canon. A port was released two years later for Playstation 2, featuring some graphical alterations and a bonus level. Originally intended to be a series, only one game was actually released. A sequel called Sentinels of the Universe was in development for Dreamcast but was cancelled. 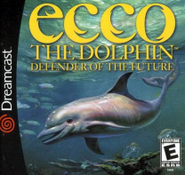 Ecco the Dolphin: Defender of the Future (Dreamcast - 2000)

Ecco the Dolphin: Defender of the Future (PS2 - 2002)
Add a photo to this gallery

Since Ed Annunziata does not hold the intellectual property rights to Ecco the Dolphin, at various times he has attempted to create a spiritual successor to the series. In the 2000s, he was developing a dolphin-centric game called Virtual Ocean, however it was later cancelled for unknown reasons. In 2013, he attempted to fund his new game on Kickstarter, The Big Blue. However, the funding goal was not reached. As a result, a smaller version of the game, and prequel, called The Little Blue is currently in preproduction.

Retrieved from "https://eccothedolphin.fandom.com/wiki/Games?oldid=7949"
Community content is available under CC-BY-SA unless otherwise noted.