Ecco The Dolphin Wiki
Register
Don't have an account?
Sign In
Advertisement
in: Games, Ecco the Dolphin Articles

Ecco the Dolphin is the original video game created by Ed Annunziata which started the Ecco series. The game was developed for the Sega Genesis console and released in 1992. Additional versions of the game were later released for Sega CD, Sega Master System, Sega Game Gear, and Microsoft Windows.

Most levels consist of having to find and reach the exit. Usually there are obstacles such as Barrier Glyphs that impede the player's progress and have to be removed. In other cases the player will have to solve puzzles or fight a boss.

With the exception of the battle with the Vortex Queen, upon starting a level, the game will give the player a password that can be used to return to that level at any time. With the exception of The Last Fight, the player has infinite continues. All levels are arcade style and must be cleared in one try with no checkpoints present.

The player has two bars to be mindful of: health and oxygen. Running out of health automatically kills Ecco and forces the player to restart the level. Health is depleted upon taking damage from enemies and hazards, while oxygen is generally depleted the longer Ecco stays underwater. If Ecco's oxygen bar runs out, his health bar will begin to deteriorate until he surfaces for air.

Breaching will automatically restore Ecco's oxygen bar, while simply poking his head out of the water will restore his oxygen at a gradual rate. Late in the game, Ecco will be granted Infinite Oxygen by the Asterite. Health can be restored by eating fish, swallowing bubbles from certain Shelled Ones, or singing to an Invincibility Glyph. Late in the game the Asterite will grant Ecco an ability which gradually automatically restores his health, however this ability is unavailable during the fight with the Vortex Queen.

Ecco can be instantly killed by crushing hazards such as moving rocks and chunks of ice, or by being swallowed by the Vortex Queen. Ecco will not take damage while being empowered by an Invincibility Glyph, however he will still be vulnerable to crushing hazards.

B+A - Charge Sonar (has to be unlocked first).

While the Genesis console lacked the means to perform many special effects that could be performed on the competing Super Nintendo, Ecco the Dolphin does make use of a lighting system of sorts. When Ecco is above the surface or at varying depths underwater, the color of his sprite and the overall palette of the level will change slightly to show varying levels of light (at lower levels the coral reefs in the background will become harder to see).

You are Ecco, a dolphin splashing with your pod in your home bay. On a dare from another dolphin you leap as high as you can in the sky at the peak of the jump the ocean is suddenly sucked up in a sudden waterspout. When you land back in the water your pod is gone and you begin your journey.

You venture from your home bay and find other dolphins rocked by the sudden storms, some of which were trapped under vents. You find an Orca who tells you to find Big Blue, a blue whale who has headed north to die.

You head past the open ocean into the frigid waters of the north and you find Big Blue, he does not know what has happened to your pod either but tell you of a being older than them that Ecco should find. This directs them to the Asterite.

Ecco ventures back to warmer waters and finds the Asterite who tells Ecco about the Vortex, a race of aliens who visit every 500 years to feed off of life on earth. The Asterite is weak and tells Ecco they can help them if Ecco finds sunken city of Atlantis and uses their time machine to travel back in time and take one of their globes in the past.

Ecco travels to the sunken city of Atlantis where there is more information about the Vortex, not only have they been visiting every 500 years, they are getting hungrier with each visit and taking more. The Atlanteans were unable to stop the Vortex but crafted the time machine and glyphs for Ecco so that they could stop the Vortex. Ecco finds the time machine and travels back in time to a prehistoric era and manages to find a prehistoric Asterite and steal one of their globes before returning back to the present.

Ecco returns the globe to the Asterite and the Asterite endows Ecco with powers, Ecco no longer requires air and their sonar can harm the Vortex. The Asterite tells Ecco to use the time machine once more and return to the day of the storm so that Ecco can be taken with their pod and defeat the Vortex from inside.

Ecco travels inside the Vortex ship, defeats the Vortex Queen, saving the earth and Ecco's pod. They return home to resume their life once more.

Ed Annunziata had difficulty getting Sega to accept his main concept of Ecco the Dolphin as a video game. After pitching the idea repeatedly for over a year to a cold reception, Annunziata eventually decided to transfer to EA for a better paying job. When Sega asked what it would take to keep him at the company, they accepted his request for funds and a team to develop an Ecco prototype. The prototype spent six weeks in development. Upon seeing the prototype, Sega discretely approved the game for full production when it appeared on their product plans. The game spent 10 months in development. Throughout the game's development, Ed repeatedly fought with Sega and won the battle for total creative control. 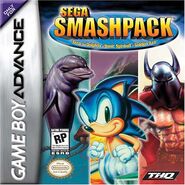 Japanese back cover
Community content is available under CC-BY-SA unless otherwise noted.
Advertisement